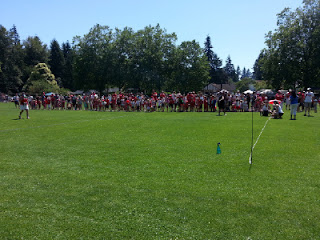 The digital age is often blamed for pushing people indoors, away from their neighbours and their community at large. But in Pemberton Heights, it wasn’t fancy apps or social media that attracted hundreds of people to the Canada Day picnic. A few signs, some great people and a genuine community spirit drew perhaps the largest crowd picnic organizers have ever seen.

Behind the scenes, the Pemberton Heights Community Association works with other neighbourhood groups throughout the year on initiatives that benefit the entire community. Annually this could be events such as the Canada Day Picnic, Meet Your Neighbour Nights at The Corner Stone, neighbourhood clean-ups, block parties and more.

In addition to this, they have advocated for the neighbourhood on issues such as saving the school and the church, licensing for the Corner Stone, and advised the District of North Vancouver towards issues such as traffic calming, development, education initiatives like crime prevention, Bear Watch, and programs about the trees. Colin Metcalfe, president of the PHCA since 2001, also noted their advocacy efforts with the Province succeeded in getting the sound barrier installed on Highway 1.

Herman says many people get involved through the Mum’s Group, the PAC or when an important issue arises. “We are advocates for the neighbourhood, but we are also about building the community.”

The PHCA has an annual general meeting and meets about 3-4 times a year or when an issue comes up, and while most initiatives are self-funded through the generosity of residents, money that is raised goes towards signs, community events, donations to North Shore groups, and other requirements as needed. If there are initiatives people think the PHCA should be involved in, they are encouraged to reach out.

Colin is quick to point out that their role is more as an advisory group to represent the community for initiatives that will affect the whole neighbourhood such as dedicating the former Zig-Zag Park as Ashdown Park in honour of Frank and Marjory Ashdown.

Looking forward, Colin says the PHCA will be working the District on the use of the former church facilities including the gym as well as traffic issues, more prominent crosswalks, and concerns around densification in the neighbourhood specifically with lane-way homes.

“There is a lot of people who work to make Pemberton Heights what it is,” says Herman.

“If there is a big issue, we will all work together.”

The Pemberton Heights Mums Group is always happy to welcome new members. Stay in contact with the group via emails, monthly meetings and the active Facebook site (must be a member to view). Email Shawna at phmg.email@gmail.com for more info.

Meets every 2nd Tuesday of the month and is currently seeking volunteers for a variety of positions as well as help with the 2016 Spring Gala. Visit the website for more info at www.capilanopac.com
Posted by Gavin Hughes Real Estate Solutions at 14:16